“Our mutual goal was to have Hina tell her story in her own words, creating a personal narrative that would organically inform and engage viewers about Hawaii's tradition of embracing gender diversity." - "Kumu Hina" filmmakers

The Kumu Hina Project is a multimedia community educational campaign for gender diversity and inclusion rooted in Hawaiian culture. "Kumu Hina" is a documentary film about the struggle to maintain Pacific Islander culture and values within the Westernised society of modern day Hawaii, United States (US). It is told through the lens of a Native Hawaiian who is both a proud and confident mahu, or transgender woman, and an honoured and respected kumu, or teacher, cultural practitioner, and community leader. Revolving around the film and curricular tools to spark discussion and learning within the school context, the initiative offers a model of the advantages diversity brings to the entire community and the importance of understanding and preserving indigenous culture. Exploring topics ranging from bullying to colonialism, from the importance of parental acceptance and support to the difficulties of holding onto Pacific Islander values, "Kumu Hina" is designed to appeal to everyone who seeks a more just and peaceful world.

The 1 hour and 17-minute-long film traces the evolution of a real person, Hinaleimoana Kwai Kong Wong-Kalu (Hina), from a timid high school boy to her position as a married woman and cultural director of a school in one of Honolulu's grittier neighborhoods. The documentary opens with the stereotypical scene of Hawaii: palm trees and surfing. Then, it turns to Halau Lokahi Charter School, a Hawaiian culture-learning environment. Students at Halau Lokahi learn to hula and preserve their native heritage. "Kumu Hina" stands for kumu, or dance instructor. One of Hina's sixth-grade students, Ho'Onani Kamai, is considered to be in the middle, neither male nor female, like Hina. As Hina contemplates who should lead the school's all-male hula troupe, Ho'onani (who is proud to be seen as a mixture of boy and girl) presents herself as a surprising candidate. As teacher and student, both of whom are very comfortable in their skin despite being considered different, prepare for a climactic end-of-year dance performance, they meet many obstacles but hold fast to the idea that being true to oneself matters most. The film also delves into Hina's pursuit of a dream of her own: a fulfilling romantic relationship. Her marriage to a headstrong Tongan man, and the challenges they encounter, offers a deeper understanding of the true meaning of "aloha": love, honour, and respect for all. Hina's husband, Haemaccelo Kalu, is worried about how others perceive him and that people would think he was homosexual since he married a mahu. Throughout the film, Hina also struggles with her identity in their marriage; she feels as if she has to play a role as a wife even though she does not want to embrace that gender identify.

The film has been screened around the world. The major distribution channel has been public television in the US (on Public Broadcasting Service, or PBS), but it has also played at over 100 film festivals around the country and world. There have also been screenings connected to advocacy events. For instance, in December 2016, transgender activists, government representatives, community representatives, diplomats, and United Nations (UN) experts gathered in Islamabad at the UN Information Centre to discuss the educational, economic, and health issues facing the transgender community in Pakistan. Jointly organised by the High Commission of Canada and the UN Information Centre, the panel discussions were followed by the screening of "Kumu Hina". (Though officially accepted and even recognised in the that country's identity cards, the transgender community in Pakistan suffers from serious stigma and discrimination. Often rejected by their families, transgender people have very little access to the labour market and proper healthcare. Therefore, transgender people end up living in very difficult conditions and are frequently subject to violence in many different ways.) To read a message from the film's creators about how they have carried out outreach, distribution, and engagement for "Kumu Hina", click here.

Organisers have developed tools to use with both the full documentary "Kumu Hina" and a shorter children's film called "A Place in the Middle", for students from kindergarten through graduate school. The Kumu Hina educator's guide [PDF]can guide teachers in showing, and engaging in dialogue about, the film in classes on a variety of topics, including Gender, Women's Studies, Ethnic and Cultural Studies, Sexuality, Health, and Film Studies. The film can be used to discuss: the power that comes from understanding one's own culture and respecting the cultures of others; the Hawaiian concepts of mahu, gender fluidity, and inclusion; the benefits of diversity to individuals, schools, and the broader community; the true meaning of aloha and its core concepts of love, honour and respect; how contact with Westerners altered Native Hawaiian culture, contemporary attempts at revival and preservation, and the benefits of preserving indigenous knowledge and perspectives; ways to empower gender creative youth and prompt schools and other institutions to be inclusive of students across the gender spectrum; and how to help families, communities, policymakers, and other leaders understand that all people deserve acceptance, inclusion and equal treatment. Visit the Kumu Hina website for more details about how educators can use the film, as well as to sign the "Aloha Pledge".

"A Place in the Middle" (see below) is a shorter (24-minute-long) children's version of Kumu Hina, telling Ho'onani's story through her own voice and colourful animation. "Ask your local school or your workplace to show this film as part of their curriculum or employee training program, or perhaps as a special event associated with the International Transgender Day of Remembrance (November 20), International Transgender Day of Visibility (March 31), Asian Pacific American Heritage Month (May), or Indigenous People's Day (aka [also known as] Columbus Day). The film and accompanying educational materials are available through the "A Place in the Middle" website. 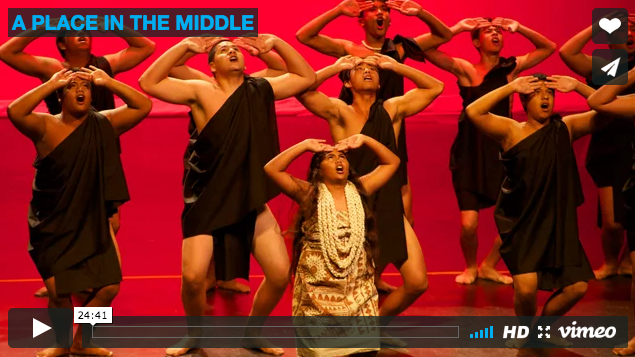 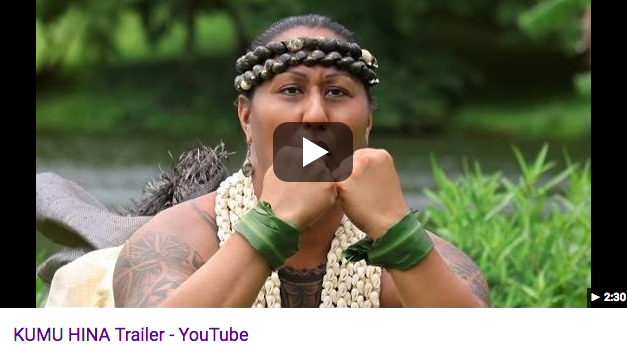