An Evening with Kumu Hina at the Ford Foundation

As grant makers at the Ford Foundation, we’re accustomed to collaborating. Our initiatives—Advancing LGBT Rights, JustFilms, and Supporting Diverse Arts Spaces—not only intersect; they also reinforce each other. When we work together, we’re reminded that three voices can truly sing louder than just one—an idea that was exemplified at a recent film screening and live performance.

On December 10, the foundation hosted 2014’s final JustFilms Philanthropy New York screening and performance series, this time celebrating cultural icon Kumu Hina, a transgendered Native Hawaiian activist and teacher, and the subject of the evening’s film. After her beautiful chanted greeting (a Hawaiian oli), she was joined on stage by world-renowned Hawaiian musicians Keali'i Reichel and Shawn Pimental, whose music brought the refreshing trade winds of Hawaii to a cold New York evening. By the time Kumu Hina returned to perform a hula, the 300-strong audience had been transported to a world of grace, revelation, and aloha.

The performances were the perfect prelude to the screening of Kumu Hina. Directed by Dean Hamer and Joe Wilson, the film tells the inspiring story of Hina Wong-Kalu, also known as Kumu Hina. In high school, she was a young man named Colin Wong, who harnessed Hawaiian chant and dance to embrace his sexuality as a māhū, or transgender person. As an adult teacher, Kumu Hina supports a young girl student, Hoʻonani, as she fights to join the all-male hula troupe, pushing against the boundaries of conventional gender roles. Kumu Hina provides a holistic Native Hawaiian cultural context that affirms Hoʻonani as someone who is waena (between) and empowers her to move fluidly in her identity.

Kumu Hina’s story centers on the power of culture to shape identity, personal agency, and community cohesion. It transcends the cliché of a young person coming of age through dance, because it is grounded in a Pacific Islander value system that offers a fluid way of understanding and valuing  identity—giving us all fresh ways to see each other with empathy. The film also points to Hawaii's leadership as the first state to have two official languages, English and ʻŌlelo Hawai'i; as an early proponent of gay marriage; and as a model for a polycultural America, where culture and values influence each other and move fluidly across boundaries rather than live side by side, or in a hierarchy, as separate entities. But ultimately what makes this film so memorable is that it allows audiences to experience the incredible journey of one person and her community, teaching people everywhere to see, appreciate, and truly embrace LGBT people.

This special event demonstrated how arts and culture, including film, dance, and music, serve as a central means of self-expression and political activism for LGBT people of color. They also exemplify how partnerships—those three voices singing as one—can help amplify a powerful story and support our grantees as they reach for a wider audience. 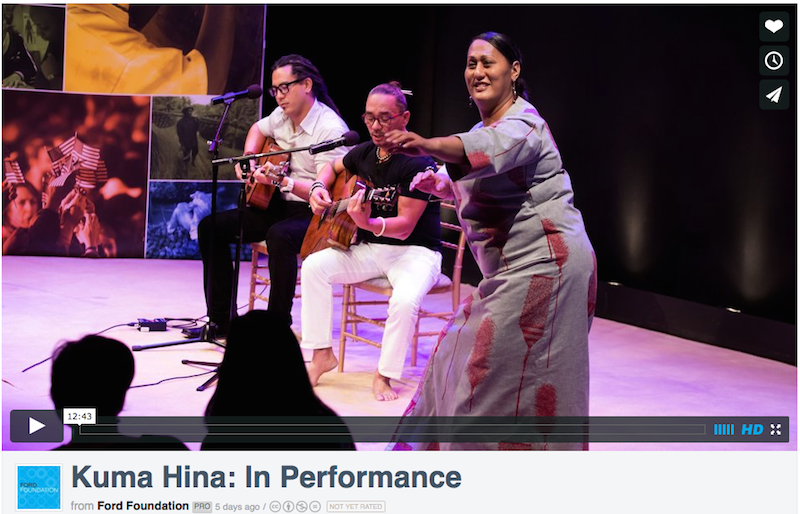